Fish escape from fish farms: this is a known and accepted fact.  Farmers do their best to reduce the risk of escapees, but often they still occur, and the effects that the escaped fish have on the environment is still being examined.  However, it is known that escapees can sometimes breed with wild fish, which can have severe genetic consequences for the wild population.
However, there is a method that can be used to create sterile fish, fish that are physiologically incapable of reproduction: this method is called ‘triploidy’.  Without delving into too much scientific jargon, triploidy involves interfering with the process of fertilization, resulting in an embryo that has more chromosomes than occur naturally.  These fish grow normally, but when they mature and are ready to mate, their gonads do not develop and they are incapable of producing viable sex cells.
This is NOT genetic modification: no genes have been changed or inserted.  Instead, artificial methods have been used to manipulate the number of chromosomes present, resulting in infertility.
But the benefits of triploidy do not stop at sterility: normal mature fish invest massive amounts of energy into gonad production.  In triploid fish, where the gonads do not develop, this energy can be utilized for growth instead of reproduction, meaning that triploid fish grow faster and have better feed conversion ratios than non-triploids: this has large implications for the economic viability of a given fish farm.  Plus, if these fish escape, they are guaranteed to not interbreed and hybridize with wild populations!
From a practical and an economic perspective, producing triploids is not challenging, so more commercial attention should be focused on this practice.  In my opinion, the benefits clearly outweigh the costs, and in an ever-growing effort to become more sustainable, this is a no-brainer for the aquaculture industry.
Written by Brian Albaum at 2:20 PM

Brian Albaum
Monterey, California, United States
I have been involved in the aquaculture industry for more than 10 years, working in a variety of countries with a number of species. I earned my Master of Science in `Aquaculture Business Management` from the Institute of Aquaculture, University of Stirling in Scotland. I also earned my Bachelor of Science in marine biology and business from the University of Victoria in British Columbia. I focus on profitable enterprises that are both environmentally- AND economically-sustainable with a particular interest in the economics of integrated multi-trophic aquaculture, recirculating aquaculture systems, aquaponics, and global eco-certification schemes. Additionally, I work in the small but specialized field of aquaculture insurance, which was the topic of my Master's dissertation in Scotland. 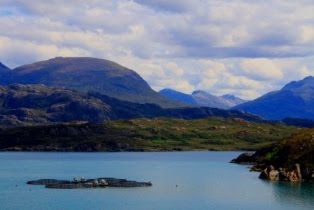 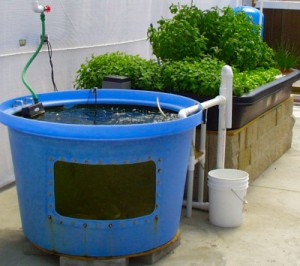 Recirculating system in which wastewater from fish tanks serves as fertilizer for plants, which filter the nutrients from the water before it returns to the fish tank